Author Dee Dee M. Scott believes the limit is higher than the sky. This is how the thirty-five year old wife and mother lives her life, fearlessly pursuing her dreams. Scott has added Screenwriter, playwright, director and producer to her list of accomplishments. She currently has eight authors signed to her publishing Company: Ahsyad Publications, and is producing two stage plays (Misery Loves Company, and All The Bad Man Can Do Is Keep The Good One From Coming To You.) coming in 2014.

Scott also wrote, produced and directed, My Husband's Woman-The Stage Play, which played for two shows at: The Town Theater on November 27,2011 and toured South Carolina. With plans to bringthe show up North,
My Husband’s Woman will continue to tour throughout 2013. Currently, Scott is producing and directing her first film: Lake House, which she also wrote. It will be released to select theaters in the summer of 2013. Scott worked as a first grade teacher before becoming a full time writer and the publisher at Ahsyad Publications.

Dee Dee resides in Columbia, South Carolina with her husband and their children. In her spare time, Scott enjoys Yoga, traveling, and spending time with her family.


A&RBC: How did you become a writer?

Dee Dee: I have been writing since the age of six. It was something I always did. By the time I was a teenager, I was writing poetry and performing in front of audiences. I wrote my first book after my husband brought me a computer to stop me from taking up space in our closets with the notebooks of stories that I had hand written.
A&RBC: What are you hoping readers take from your book?
Dee Dee: That my book is more than just a story about an affair. This story shows the psychological and physical effects one man’s affair has on his wife, mistress, friend, and everyone else involved in his life.
A&RBC: If you were to write a book about a controversial topic, what would it be?
Dee Dee: I’m a non-controversial person. I leave the controversial topics to the characters in my stories.
A&RBC: Are you an avid or occasional reader? If so, what is your favorite genre of books?
Dee Dee: I’m an avid reader. My favorite genre is Thrillers.
A&RBC: If you could interview one of your favorite authors, who would it be? Why?
Dee Dee: Langston Hughes. When I was ten, I read most of his poetry books and remembered them by heart.
A&RBC: If you could make a movie out of one of your books, which one would it be?
Dee Dee: Lake House. I am currently producing this film and it will play in select theaters in 2013.
A&RBC: Which marketing/promotions or publicity strategy has worked best in your favor?
Dee Dee: Social media sites and regularly contributing to blogs.
A&RBC: Which do you like better traditional or self-publishing? Why?
Dee Dee: I’ve never been traditionally published. However, self- publishing allows me complete creative control.
A&RBC: What new projects are you working on?
Dee Dee: I am working on my first film: Lake House that will be released later in 2013. I will also continue touring with the stage play- My Husband’s Woman. I am also producing two stage plays (Misery Loves Company and All The Bad Man Can Do Is keep The Good One From Coming To You) coming in 2014.  I also have eight talented authors signed to my publishing company, Ahsyad Publications. Some of their books will be released soon too.
A&RBC: Where can readers find you?
Dee Dee:
https://www.facebook.com/#!/pages/Author-Dee-Dee-M-Scott-BookReaders/127946103924967
http://www.facebook.com/pages/The-Stage-Play-My-Husbands-Woman/105859049511050
Twitter:
https://twitter.com/MyHusbandsWoman LinkedIn
LinkedIn:
http://www.linkedin.com/pub/dee-dee-m-scott/16/609/178 Goodreads
Goodreads:
http://www.goodreads.com/author/show/3097894.Dee_Dee_M_Scott 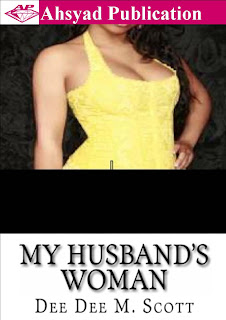 ﻿
Young and beautiful twenty-year-old Meshia can have any man she wants, but who she can't get enough of is her thirty-eight-year-old married lover Byron. Successful attorney Byron enjoys being the world of two women: a wife he loves and a mistress he lust for.

Wife Alexandra has based her sanity on the faithfulness of her husband Byron. When she
discovers their hidden affair, she takes Byron and Meshia into a bizarre world, one of which they could never have dreamed of, even in their worst of nightmares.

Lies, surprising twist, and sharp dialogue will keep you turning the pages of this remarkable novel!
Posted by Teresa B at 4:54 AM