AAMBC Presents Book of the Month: That Good Grind by Wilson 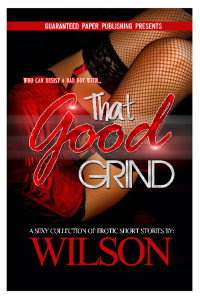 When Rena hooked up with Omar, she thought she had the upper hand. He was a bad boy, but she was a little older and a lot wiser. Until his touch turned into her addiction. She simply can’t say no. When Omar’s sexual challenges take her on a dark and twisted path, Rena does everything in her power to resist him. But who can say no to a bad boy with that good grind?

Excerpt:
I couldn’t think of Bitch without my gut wrenching. The thought of her riding his dick, her laughter tickling the air, her confident smile stretched across what I imagined was her perfect little cute face, her perfect round breasts bouncing up and down on his lovely face, his tongue licking up her neck to her chin, his arms wrapped around her perfect body. I remembered all the things he had done to me, but with her it was probably better, because she was probably prettier than me with a smaller waste, bigger ass, softer skin, sweeter smell, wetter pussy, tighter pussy. My mind played out every variation of how she looked, how he liked fucking her, how he smiled when she stripped for him, how he enjoyed her better. And with every thought my stomach tightened and my bowels moved. Literally. By that night, I had the nervous shits. Something I had never known personally. My girlfriend had told me about the nervous shits when she and her man had broken up the year before. I had always laughed when she named it, thinking she was joking. I now knew the truth and it wasn’t a joke. My friend owed me a slap in the face for laughing at her. The nervous shits was another form of hell, added to the mental torment I was already suffering. The simple vibration of my phone made my stomach twist-hoping it was Omar, terrified it was Bitch-and sent me running to the toilet.
I was losing myself. I had to have Omar. I had to have him back. I couldn’t let go, I couldn’t not be with him. Not like this.  I had wound up with Omar by complete coincidence. I didn’t know anyone he knew and vice versa. I never mess with men that I can’t track through some connection, but Omar and I had fallen into our relationship, it had taken us both by surprise, and all the rules had been broken. If it ended like this, it would be completely over.
And Bitch couldn’t have won. She couldn’t have beat me that easy. It wasn’t fair that she was obviously better physically, probably younger, probably more money, better dressed. And now she had the one thing that mattered….the simple air that I breathed. Omar.
And maybe I couldn’t get rid of her. I might have completely lost to her. I still had to have him anyway. I need him to make this feeling of nothingness that was sitting on my chest like a foul breathed beast evaporate. At least lessen. I might have to take him, however, I could get him, just so I would be able to inhale and exhale without feeling like throwing up and shitting.
Maybe she was the better woman, maybe I would have to be the bitch on the side. I could swallow that too, if he would just have me. Her laughs filled my mind like soap bubbles swelling around running water. I was mentally drowning. They were probably fucking right now, while I was lying curled up in a knot at the foot of my bed or running to the toilet to shit water. I wanted to die.
About The Author
Wilson is the author of Solo Shivers and That Good Grind, the first two of four erotic tales she will release this year. Wilson signed with Guaranteed Paper Publishing, Inc., in 2012 and her erotic novel Two Plus One is due out in Spring 2014. Her pen is hot, her imagination even more vicious, look for more tantalizing stories that will surely delight you. Check her out at http://www.guaranteedpaperpublishing.com .
Get to know Wilson :

1. How did you come up with the title of the book?
My girlfriend and I were talking about the men in our lives. I said that I was addicted to bad boys and she answered, “Who isn’t. No one can fight off a bad boy with that good grind!” It was so true and so perfect for the story, that it became the title.

2. What is That Good Grind about?
Rena gets caught in that space between love and addiction. So does Omar. But he is clear about what he wants, Rena is straddling the fence-wanting to fight the urge, but coming back for more. Eventually, she has to make a choice…I am not sure if she got it right, though. lol.

3. What else have you written?
Solo Shivers. In Solo Shivers, Zuri’s mind rewinds to the best lover she has ever had, causing her to have the best “solo shivers”. But her day to day life isn’t coming close to that. When she tries to recreate the passion that still lives in her mind, Zuri gets caught in an embarrassing situation, but finally gets closer to the passion she requires.

4. Which do you recommend?
B
oth are great reads and will shock you but stimulate you at the same time.

5. What’s next?
Two Plus One is the novel I am currently working on. And I am doing a project with KAI, author of Daughter of the Game and The Loudest Silence – she contributed to both Solo Shivers and That Good Grind. 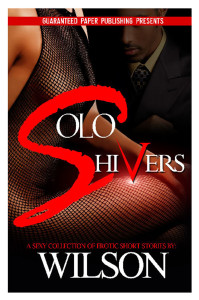 Email ThisBlogThis!Share to TwitterShare to FacebookShare to Pinterest
Labels: Book of The Month, Book Spotlight