Listen To What He Does, Watch What He Says by A.H. Carlisle III 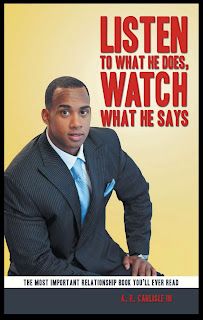 
Have you ever wondered during your journey in building relationships, why the simplest processes turn into the most complex levels of deception? The information that you will read in this book is not a quick fix remedy on how to perfect this cycle but allowing more insight on the complexity surrounding men. This knowledge will help you: Understand how men process issues relating to dating; Knowing if he is ready to commit; The many reasons that more and more men's failure to remain monogamous is deeper than the surface. One of most important things that you will learn is that paying close attention to the Why" will help to determine the "How" in making the best decisions for your life. I will help to stimulate your thinking to align his words with his actions. Building a solid foundation in your relationship has enough challenges considering outside influencers. The ultimate decision on how you move forward in life depends solely on you".


"Many times women tend to wonder about the desires of a man and if his will is to consume her solely in a physical manner or if there is more to than what meets the eye.  This question is a question that plagues the minds of almost every woman from the very first date in which she accompanies a man.  The problem is, this question is sometimes answered in the moment.  Quite often men will have one idea in mind yet that original idea may change during the course of the date or the tenure of dating.  Typically, we all have operated off of a triangle based love concept.  The three components of this triangle are physical, mental and emotional.  In general, a man tends to allow physical to be his main component where as women allow their emotional factor to be their main component.  Eventually, it is the mental that connects both parties." 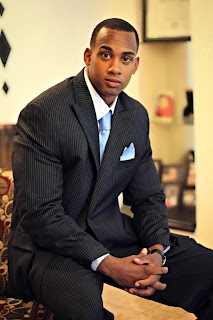 A. H .Carlisle III was born in Youngstown, Ohio and began his journey to self-discovery early on.  Throughout his career and personal life, he has had many life experiences, some tragic but many successes.  Along the many paths of this journey he began noticing certain patterns amongst his male peer groups.  These commonalities prompted his thinking to break down these traits so that women could better understand.  It was no secret that he had a passion for helping others and these experiences led him to writing this book, to try to help many.  One of his many life lessons is that when people better understand something they are able to react and make better decisions. As a result of these self discoveries, he chose to share this journey of life lessons with others in hopes that it will improve relationships one lie at a time.  In bringing issues to light that seem commonly responsible for the demise of many relationships, he hopes to better the decision making process for women and men alike.


1. In your book, “Listen to what he does, Watch what he says,” you talk about how your personal life inspired you to write. At what point in your journey did you realize you had a story to tell?

My sister, who I speak of in my book, has had a very hard life.  She has battled drug addiction for the last decade which has taken an emotional toll on much of our family.  There was a point where she was on the road to recovery and her and I talked about our life stories.  It was then that I realized I had a story to tell.  However, the story I wanted to tell would not be the story I would eventually tell.  I originally wanted to talk about all the women I had been with and how I was a self-proclaimed ladies’ man.  Boy did I have a story.  The deal was for my sister to stay clean and for her to do an autobiography on me and I would pay for everything and she would reap the reward.  It never happened but I knew I needed to tell my story.  As soon as the "pen hit the paper" the story took a drastically different angle.  I realized what I really had been through and how much more powerful of a story that would be.  Why not try to help others the way I have helped myself over the years? Why not use my blessings to "minister to others"? And so my story began.

2. With popular books such as, “Act like a lady, Think like a man,” why do you think it’s important for woman to be aware of the difference between action and words?

If you have read "Act Like a Lady, Think Like a Man" or most other relationship books out there, you know that they are all doing the same thing, telling you how to change in order to make things work out for you.  Changing should not even be an option unless you are changing to become a better you.  At the end of the day you can be the best person you can be but if the person you are dealing with is not ready to be in that relationship, not ready to commit, or not ready to show respect and honesty, what does it matter how much you have changed or how good you are?  Truth is, it doesn’t.  You have to first be aware, be able to not only listen to what they wish to tell you but also watch what they are doing in relation to those words.  This is how you help to protect yourself from wasted time and potentially from people who do not have your best interest at heart.


3. You get very personal in the beginning of your novel and as a writer I appreciate the transparency, what was your thought process on opening up about your childhood and how do you think it helps your reader?


My thought was simply this, we all have problems.  As humans we are fallible and that is just the reality of it.  A lot of the problems we have however are or were uncontrollable.  Most of us just choose to block out these problems and think that we are good, never realizing how we are being affected.  It took me a very long time to link my childhood problems to my problems of today.  Most people never come to that realization and so they continue to sabotage their own relationships.  I hope that in my honesty and transparency, others will be more emboldened to first understand and then accept responsibility for what is affecting their own life and the decisions they make.


4. “Failure has to be a realistic option for a woman because even though she is ready and willing to settle down and give her all, this does not mean that the man she meets or even the first ten men will also be ready.” Why do you think this is such a hard concept for some women to grasp and how are some of your female readers responding to this?

I think the biggest issue is emotional blindness.  Just as I talk in my book about men being raised to be tough and to not show emotion, women are raised to be nurturers, to have a family and to be a wife.  This has been engrained in women throughout society since the beginning of time.  How does a woman separate emotions when meeting a man who appears to have it all together?  Especially when he is saying everything so right.  They must take off the emotional blinders in order to realize that it's okay to fail, if you believe you are worth being a wife, when the right man comes along then being a wife you will be.  My female readers are really taking to the idea; however, it's easier said than done.  This is the lead in to my next chapter.....


5. Your Facebook page is filled with tidbits of advice for healthy relationships, what has your response to that been like and do you believe it helps promote your book?


The response has been amazing.  My page has gone from simply promoting healthy relationships to providing relationship advice.  Women want to believe that it is possible to have a healthy relationship and I am here to help them continue to believe.  The important part is ensuring they understand their part in making it happen.  I am not sure it helps to promote my book at the level I desire; however, I do believe it helps to promote me.  As I grow, the promotion of me will help to lead people to want to read what I am putting out, whether it is in books or speaking forums.

6.  My column is called The Lit Underground and what we are doing is focusing on authors who are self-publishing or are with independent publishers who have made their presence known on a smaller scene. What is the best advice that you can give? Something that you’ve learned from experience that no one told you before getting into the literary game.

The best advice I can give is, gain credibility and gain a fan base.  Without it you are doomed for failure.

7. What’s next for Andrew Carlisle and where can your fans reach you?

I plan to put out a book of my own quotes around May/June.  This will also be the introduction to the next book.  It's one thing to "Listen to what he does, Watch what he says" but then what? A woman must be willing to act on it.  I do not believe that women are not already seeing inconsistencies when dating, what I am sure of however is that most of them either choose to ignore them intentionally because of the hope for something great or unintentional because of their emotional blinders. This has to stop if women wish to be successful in relationships.  My next book will seek to address this issue head on.