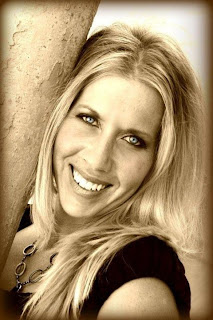 S.L. Morgan was born and raised in California. After 29 years of living in the Sierra Nevada Mountains there, she and her husband began their journeys of moving throughout the United States. She currently lives in Texas, where she and her husband are raising their three children.

In October of 2011, S.L. Morgan became inspired to write her new novel series, Ancient Guardians. With her passion and love for Jane Austen and other classic romance novels, she was motivated to write a novel series of her own. The Legacy of the Key is the first book in her novel series, taking readers not only into a new magical dimension—but giving them a feeling that they have been transported back in time—into England’s seventeenth century.
With her second novel in this series nearing its release date in late summer 2013, S.L. Morgan is currently writing in the third novel of the Ancient Guardians series, and is excited to bring her readers on more adventures and journeys with these characters. 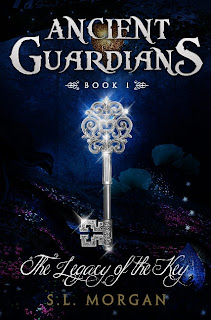 No matter where you are, facing your reality with passion and purpose will always lead down the path you were intended to go.

While Reece Bryant is making her way through this world on her own, she is suddenly confronted with the truth of her existence, and the reality of her future. It is when she encounters two alluring and mysterious men, that a series of extraordinary events takes place, putting Reece’s life in grave danger. With her life in the balance, Reece must blindly trust the two mysterious strangers; and when she does, she is brought into an enchanting world that is beyond her logical comprehension.

This captivating land reveals new worlds and new dimensions to which her existence is paramount. But it is once she falls in love with the stunning Levi Oxley that everything will change, and Reece’s life will be in more danger than ever before.

Forced to return to Earth and face a Council of Worlds, Reece discovers there is more to this enchanting dimension than she could have ever imagined.

At a moment’s notice, even thru the fog of our denial, our journey can become crystal clear. And within the revelation, once our fear subsides, we can find contentment and purpose if we focus on the things that matter most. Trust—Courage—Love.

Levi hustled Reece into the front seat, and got in the back seat, behind his cousin. Instantly, the car was in gear, and they were moving. The car went from a dead stop, to what seemed to be the speed of light; yet, it felt like they weren’t moving at all. The trees they were passing, a complete blur in her vision, were the only thing that gave relevance to the fact that they were moving. None of it made sense. Is this even a car? She looked at the driver, wondering how he was managing to keep the car on the road. He didn’t slow the car once, not even to take a sharp turn.

The driver looked over at Reece, his eyes were piercing in their light silver-blue color. “I’m Harrison, by the way. Relax, Miss Bryant—I drive rather well.” He looked out at the snow; it had gone from a light flakes to heavy clumps hitting the car. “Sorry we had to interrupt your lovely morning in the park.”

Reece nodded. Harrison was as superbly dressed as Levi. She questioned who these men
really were. “Do you guys work for the government or something?”Harrison glanced over at her and subtly grinned. “I suppose you could say that,
yes.”

She looked back at Levi; he was intently focused on a transparent object in his hand. “Where are we going?”

Levi didn’t answer. Instead, Harrison responded. “We’re taking you to a safer place, Reece. I’m sure my cousin hasn’t explained much. Unfortunately, explanations take time. I can give you the lighter version of facts; however, I need you to promise you will not do anything crazy, like jump out of our car.”

Reece looked at him quizzically. Her anxiety soared, but she hoped her expression didn’t show it. “I won’t be jumping out of any cars; I understand basic physics, thanks.”

He chuckled. “We’ll see about that!” They were leaving the city and going into the more rural areas. “Tell me something, Reece; have you ever considered the existence of other worlds, apart from your own?”

Reece swallowed hard. “You mean, like Mars? Not really, why?”

“The man in your room—you thought he was a ghost, correct? Or possibly a bad dream?”

He chuckled and glanced at her with a mischievous grin on his face. “Reece, he was neither. He was not of your world.”

Reece stared at him in shock.

“Maybe a little too much information?” He smiled sympathetically. “You should relax. Where you are going will be much more welcoming than where you were about to be taken.." He looked into the rear view mirror. “Levi, we’re almost to the vortex. Make sure Javian has sent for Areion and Saracen. We should get Reece to Pasidian quickly.”

Did he just speak in a different language? Reece rubbed her forehead disbelievingly. The car grew silent, except for the low purr of the engine. The road they were traveling on was long,
winding, and very narrow. Considering the high speed they were driving, combined with the sharp turns, Reece expected to have her body weight thrown all over the inside of the car; yet, gravity had no effect on her. Even so, she started to feel sick to her stomach. She didn’t really trust the two men, but she’d burned her bridges. She decided to stop asking questions. The answers she was receiving were more than she could cope with right now.

The road curved around a hill, and as she watched, the car left the road effortlessly, heading straight for the hillside. It appeared as if they would crash directly into it. Reece took a
quick breath, and was blinded by a bright flash of light.

The paved road they traveled on now was shiny black, and lined with trees unlike any Reece had ever seen. Their trunks were white, with vivid red leaves beaming on their incandescent white branches. She looked deep into the dense forest of these peculiar trees and noticed that they appeared to be glowing in the darkness. The bright, lime green grass that carpeted the grounds of the forest, took on a glowing quality as well. It was strange; it was as though the radiant grass and
leaves illuminated on their own, in total darkness.

It appeared as if everything was glowing in color. A drop of water on the windshield sparkled like
crystal. The sky had a sapphire quality to it. She felt as if her vision had changed entirely. What is this place? All she saw was the illumination of the nature all about her, and none of it seemed real. Wherever they were now, the skies were vivid, bright and sunny; a far cry from the snowy streets of Philadelphia.

She looked at Harrison, then back at Levi, to see if their appearances had also changed. Nothing was unusual about the two men. She held her hand up and examined her skin. Normal. It was very odd; it was only the nature around them that had shown this interesting radiance. When she turned her attention back to the road, she saw a large, shimmering gate ahead. It was fashioned with beautiful patterns, circling throughout. She could see that there was no longer a road on the other side of it, and they would most likely have to stop. She wondered how they would manage to bring the car through, or if they would? As soon as she questioned the thought, Harrison turned the car into a dark area, which seemed to be a cave or something of that nature. As he parked
the car, she noticed that the area they were parked in was filled with sleek black motorcycles, and other cars like the one she was in.

When the car shut off at Harrison’s vocalized command, Reece reached over to his arm to stop him from stepping out of the vehicle.Time for answers.

He looked back at her with concern. “Reece, we’re almost to our destination. I know a million questions are probably swirling around in your head, but you need to try to be
patient.”

“Fine,” She took a deep breath. “But before we go any farther, I really need to know who you guys are. You should understand my apprehension about going any farther with you two. We should have crashed into that mountain a moment ago, and now I’m seeing trees and grass that seem to sparkle and glow. I’m sure you both know that I was well aware of what happened that day on the
airplane, too. I know you both had something to do with it. I want answers before I concede to go anywhere else with you.”
Harrison sighed. “Levi and I are from another dimension known as Pemdas. For many years, our people have protected those on Earth, and many other dimensions as well.”