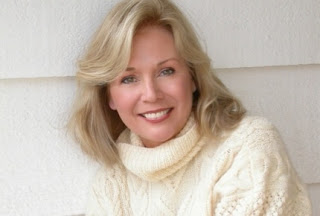 Kathryn Leigh Scott is an actress, probably best known for creating the roles of Josette DuPres and Maggie Evans, the love interests of vampire Barnabas Collins in the cult classic TV show “Dark Shadows.” Down and Out in Beverly Heels is her second work of fiction. Scott wrote Dark Passages, a paranormal romance, with more than a passing nod to the ‘60s soap and she appeared in the Johnny Depp/Tim Burton film Dark Shadows last year.

Scott is currently at work on a sequel to Down and Out in Beverly Heels. 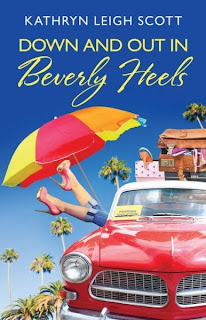 Meg Barnes, a beloved actress for her role as TV detective Jinx Forgarty,  has it all but thanks to her newlywed con-man  husband,  loses everything and ends up living on the streets of Tinsel Town in her Ritz-Volvo. This fun, light-hearted romance takes us into the Hollywood social swirl, but also delves into the gritty truth of what it is to be “homeless and hiding it” in one of the most glittering, fashionable cities in the world. It’s also a story of redemption with a “Thelma and Louise” twist as Meg, incorporating skills she learned as a TV detective, tracks down her fugitive husband and struggles to regain her reputation, career and friendships.

Excerpted from  Down and Out in Beverly Heels by Kathryn Leigh Scott, © Montlake Romance 2013

Actress Meg Barnes, homeless and living in her car, hopes to spend the night in a safer place than parked at the curb of a local park for the night. She needs a good night’s sleep because she’s got a job guest-starring in a TV pilot.

I park up the street in a cul de sac off the main road. Then, my overnight bag slung on my shoulder, I slip through a break in a boxwood hedge. In the shadow of a sycamore tree, I pause, listening to the sounds of the night. The lights are off in Marjorie Singleton’s house, my benefactor tucked in for the night. I don’t know Marjorie well, though whenever I voted,  it was in Marjorie’s clean, spacious garage, her Bentley parked on the street to make way for a bank of polling booths on election day. I’m sure Marjorie, if she knew, would be only too happy to extend a neighborly welcome to me.

It’s Wednesday: Marjorie’s son, who lives in Encino, is home with his family and won’t stop by again until Friday afternoon, when he’ll bring her Chinese takeaway. I know the rituals; I’ve watched Jake Singleton come and go. This is a safe night, and all is quiet.

I follow the flagstone walkway around the swimming pool, past the rose bed, and turn the knob on the side door to the garage. It’s unlocked, as usual. Inside, I slip quietly along the west wall to the workbench Marjorie’s long-dead husband built, and set down my carryall. I plug my laptop and cellphone into a wall outlet to top up, then move through the darkness to Marjorie’s Bentley. She rarely drives it anymore.

I toss my sleeping bag into the back seat. Tonight I can pack in a good six hours and be gone before the gardeners arrive. On those nights when I’ve had to spend the night in my own car, I remain fully clothed, doors locked, windows open no more than a finger-tip wide.
Usually I find a spot on the street around Holmby Park, the gates to Aaron Spelling’s mansion within spitting distance. Should his ghostly presence be hovering above his former abode, I can imagine his bemusement seeing me camping out a stone’s throw from his old bedroom window. I still get residuals from his shows, blessed checks from repeats of mindless fluff that pay my car insurance and buy me another month at the health club. But those nights parked on the street, hiding under spread newspapers, even with the tinted windows, are the tough ones, the only time it really hits me that I’m homeless.

More accurately, I am without a home. I am not actually a Homeless Person. I always manage to have a roof over my head, even if it comes with four wheels and a dashboard. I’m not a bag lady, a bum. I’m not a thief, though I suppose I’ve stolen a few pennies’ worth of kilowatt juice from Marjorie. But the back seat of an old lady’s car is only temporary accommodation, not Home, Sweet Home. I awaken too often in the night, dozing more often than sleeping.

I slide my legs deeper into my sleeping bag and hug my arms for warmth, trying to stop the rat-wheel of worry spinning in my head. I am far from complacent about the fix I’m in, yet I manage to drift off in welcome sleep.

Moments later—or is it hours?—I’m fully awake and alert, every fiber of my being a listening device. What is it? What did I hear? My heart bangs in my ears as I strain to sort out the sounds. The irrigation system kicking in? A squirrel on the roof?

Hearing footsteps falling softly on the flagstone walk, I slide free of my sleeping bag. Who’s coming for me? Who in hell knows I’m here? My fingers close around a small can of pepper spray. I don’t even know that the aerosol works. The container is old and I’ve never had occasion to test it.

The garage door scrapes open. A beam of light arcs across the windshield. A male voice booms. “C’mon out. Now!”

… It’s my Margot Kidder nightmare, a “caught-in-the-headlights” shot of myself disheveled, my arms clutching a sleeping bag, splashed on the cover of a supermarket tabloid: “Former ‘Holiday’ Star Down and Out in Beverly Hills!”

Tears sting my cheeks. Wouldn’t the paparazzi love this shot? Jinx, face puffy, mascara smudged, lurking in someone’s garage. I press my forehead into my sleeping bag, recalling poor Margot, missing her front teeth and in need of meds, cowering in someone’s backyard. What’s my excuse? If I’m busted now, it’s the end of my job next week, the end of pulling myself out of this confounding mess I’m in.
Posted by Teresa B at 5:01 AM