Author of the Week: Yasmine Harrison 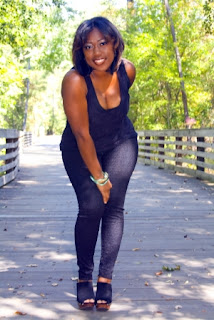 Atlanta's own Yasmine Harrison is a Florida native, but has strong roots here in her hometown. She branched out into the literary scene in 2009 and released her debut novel "Turning Point". She hit the scene with a bang and rocked the literary world. Since then she has not looked back. By popular demand she returned in the Fall of 2010 with two releases "Turning Point the Sequel" and "Still Poetry Collection." She is currently working on new projects to date with an expectation of a release Spring 2013.
Yasmine is an accomplished self- published author, entrepreneur, actress, director and playwright. She wrote and produced her first stage play "Turning Point" based on her novel this past April.  She has starred in the play "Secrets of a Kept Woman" and has had Extra roles on "Tyler Perry's House of Payne." She is definitely a rising star and someone to look out for. She is a graduate of Valdosta State University. She devotes her time to reading, writing and mentoring. She is the CEO of The Harrison Group, her publishing company and a Board member for the male academy, The Scholarship Academy. Her community involvements include her annual feed the homeless project. In conjunction with family and friends she also participates in other charitable events. She is very passionate about the displaced and the youth.
Her Motto: "Give Freely, Love Unconditionally, Live everyday likes it's your last, Always put your best foot forward even when you don't want to and Laugh it heals your heart."

A&RBC: How did you become a writer?
Yasmine: I became a writer because I've always loved poetry and writing poems. I wrote a poem that was quite long. Friends said it sounded like a book and that is how my first novel "Turning Point" was birthed.
A&RBC: Where does your inspiration for your characters come from?
Yasmine: My characters are developed from a combination of my imagination and some of the people I know.
A&RBC: What are you hoping readers take from your book?
Yasmine: I would like my readers to take from this book the value of family and friends and to be open to love & believe in love.
A&RBC: If you were to write a book about a controversial topic, what would it be? Yasmine: Wow! If I was to write a book about a controversial topic, it would be whose the best at cheating men or women.
A&RBC: Most writers have a process or method for writing their books, what is yours?
Yasmine: I don't really have a process. I just write when it hits me. I don't like to force myself to write. I like for it to come naturally.
A&RBC: What is your favorite genre of books?
Yasmine:  I love all genres. I like to read.
A&RBC: Are you an avid or occasional reader?
Yasmine: Yes, I enjoy reading. I just don't read when I' m writing.
A&RBC: What are two things you want your readers to know about you?
Yasmine: I would like for my readers to know that I love chocolate and the beach.
A&RBC: If you could interview one of your favorite authors, who would it be? Why?
Yasmine: I would love to interview Donna Hill and Zane. I love both of them  and I'm inspired by their work.
A&RBC: What is or was your dream job?
Yasmine: My dream job would be to write for a television show like Grey's Anatomy.


A&RBC: What new projects are you working on?
Yasmine: I'm currently working on quite a few projects as far as books and plays for 2013.
A&RBC: Where can readers find you?
Yasmine: Readers can find me on my website www.yasmineharrison.com, Amazon.com, Borders.com and Kindle.com
About the Book

Daya is a successful Corporate Executive who believes in the beauty of love, life, family and friendship. Unfortunately, Daya has had her share of heartaches and heartbreaks. Just as she vows to never fall in love again.  She is swept off her feet, by the suave, irresistible and amazingly handsome Damian Lightfoot. He is everything she ever dreamed of and surely her "Mr. Right." But there is one thing that is separating the two. A secret he dares to reveal. He then disappears at the peak of their relationship without leaving a trace of his existence.
Daya then settles for Mr. "Alright," R.J. Worthington. He is carrying some serious baggage and is in hopes of using Daya as his escape goat; to disguise what and who he really is.
This thrill seeking novel will bring you to tears, make you laugh and have you seating at the edge of your seat.

About the Sequel
Author Yasmine Harrison returns with her hot steamy sequel. Come journey through the lives of Daya and friends as they conquer life's mountains, embrace the valleys; while picking up the pieces and realizing that shattered doesn't necessarily mean broken. The women of Turning Point are back they want it all and they seek to get it all... They have all "Exhaled" and are on to something new. Together they have shared many ups and downs, but their friendship and sisterhood sustained them. This time around  love, success  and happiness are knocking at the door and it feels good, but drama and trauma are not too far behind.  For some it’s a high price pay. Decisions must be made to leave or stay. This thrill seeking novel is on point and guaranteed to leave you wanting more. Captivating and brilliantly composed. It is full of suspense, drama and love. It is a true assurance that there is sunshine after the rain.
Posted by Teresa B at 8:11 AM