Rachelle Martin’s mother died on Mother’s Day when she was only 15. To make matters worse, Rachelle was in church singing her mother’s favorite song at the time. Now, at age 30, she still has not gotten over the loss of her mother. She feels it is her job to mother and protect her twin brother, Raheem. However, when Rachelle’s dad asks her to sing as a Christmas gift to him, she is transformed. She becomes the focus of many as she focuses on the here and now, instead of the pain of so long ago. She goes from a perceived ugly duckling to a beautiful swan. Her transformation changes the lives of others, making them realize what they want in life. Slowly but surely, they will all begin Crossing Over. 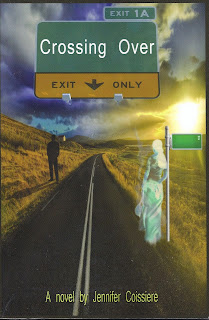 Review
Crossing over by Jennifer Coissiere is a story of true family, friendship, guidance, and the strength to move on. Rachel Martin looses her ability to sing after the loss of her mother. Raheem Martin is use to being his sister's protector but when it seems as if she doesn't need him anymore his behavior changes and not in a good way.
Dawn and Kenyon are roommates with blinders on. The two cannot see what is right in front of them but when both reveal secrets things start to become clear.
Leigh is the misguided newcomer to the group by way of Raheem. Leigh has wicked ways, which start to change once she surrounds herself with positive influences and her heart starts to mend.
Pastor Zachary and Mrs. Zinnia Brown prove to be a sounding board for all of these friends including Leigh. In Rachel's journey of healing it soon becomes clear that those close to her are in need of healing to. After past issues and secrets are revealed, hearts start to mend, and a talent once thought to be lost for good will be used once again.

This novel will take you on an emotional and compassionate ride with its memorable and enriching characters and creative storyline that is carried throughout the book. I can say beside some misusage of words it is an excellent read and I am hoping this debut novel will not be the author's last. I recommend this book to those who need encouraging and who love a good story.
Teresa Beasley
A&RBC Reviews
A&RBC & Amazon Rating: 5 Stars