Book Review: Raised by the Mistress 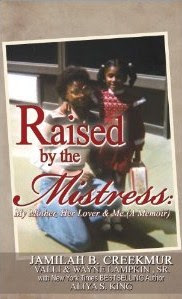 Raised by the Mistress

What do you say to a mother, who you love, that she is doing wrong? How do you tell your daughter that you know your actions are wrong, but they seem so right? In Raised by the Mistress, author Jamilah Creekmur invites readers into her world of trials, tribulations, and the after effects of alcoholism. Readers are exposed to a family that cannot manage to stay together because of a parent’s demons taking control and eliminating all that is around her.
Valli Barnes and Wayne Lampkins rocky road of romance, alcohol, and hidden secrets start taking a toll on young Jamilah. She does not like the person her mother becomes when her boyfriend, Wayne, makes a visit. Jamilah tried to stay out of the way but she witnessed her mother going down a long road of despair and it was hurting their relationship. One night, she wakes up to her mother choking her because of . Jamilah knew it was time for her to leave; she could no longer live in an unhealthy environment.
Valli’s depression and her love for continued to rule her life until she decided that she was toxic for everyone around her and she needed to get help. Yes, Valli had hit bottom and she knew the only one that could repair her and the relationship with her family was her. After time passed, the relationship with ended, Valli started to live again. Would she be able to repair the damaged relationship with her daughter?
Raised by the Mistress is an emotional story of a mother looking for love in the wrong places. It is a story of acknowledgement and forgiveness. I applaud this author for allowing readers to receive her life story and from the viewpoints of the individuals involved. The book provides a clear look into alcoholism at its worst and how it can destroy the love of a family. I experienced the frustration, hurt, and anger that Jamilah felt as she witnessed her mother fall apart. I did find some minor grammatical errors but these did not take away from the book’s message. In fact, I could not put it down, reading it in one day’s time. I definitely recommend this book to others.

Reviewed Teresa Beasley
Posted by Teresa B at 6:17 PM