Author of the Week: Valley Brown 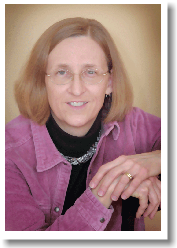 A&RBC: How did you become a writer?
Valley: I've always written, but it took me most of my life to finally call myself a writer. I wrote and illustrated stories as a child, and in high school I took a lot of journalism, but my first love was visual art, so that took precedence over writing for college and beyond. Even so, I would have these obsessive urges to write, so I started lots of stories that were never fleshed out B mainly attempts at sci-fi and fantasy, and wrote a lot of free verse poetry. It wasn't until my late forties that the mother lode of urges struck me, and I began writing what would become a novel. I realized I could write professionally and not give up my art career. Based on an earlier successful submission to a trade journal, I developed an opportunity to write a quarterly column for it. That lasted about a year. The magazine made some significant changes to its content, so I moved on, but during that time I also had a full-length article published in an aviation magazine, and won 12th place in a national poetry contest (Writers Digest, 2007/8). All of those things helped galvanize my determination to be an author.
A&RBC: Where does your inspiration for your characters come from?

Valley: Everywhere I've been. Everyone I've ever met. Each of us has tiny quirks and traits, or distinctive physical features, or unusual attitudes or hobbies B the list is endless. My brain constantly gleans trivia for future use. I'm fascinated by the inner challenges and strengths that every single person has within them, and those aren't always visible. An ordinary Aregular@ person has the ability to do amazing and courageous things when life seems to give them no choice. Overall, my characters tend to be blends of personalities. No one character is modeled directly on any one person, but I do borrow aspects of people I know or have known fairly well to build characters who I believe are credible, easy to relate to.
A&RBC: What are you hoping readers take from your book?
Valley: Wow. I guess a number of things, but mostly that love for another person is the strongest thing out there. Even people who have enormous burdens on their souls can live with those burdens if they are loved unconditionally by someone else, and love unconditionally in return. We're all in some kind of pain at any given point in time, but it doesn't have to destroy us.
A&RBC: If you were to write a book about a controversial topic, what would it be?
Valley: Now that is a loaded question. Our society has developed so many skewed attitudes, I'm not sure where I would begin. We seem to have slipped back into the medieval era in some ways. I often try to deal with my feelings on stuff I see on the news by writing short stories or personal essays about it, but those are not something I share readily, at least not yet.
A&RBC: Most writers have a process or method for writing their books, what is yours?
Valley: I normally start with a Awhat if@ scenario, then work through whatever tangents arise until I have enough for a really rough outline. Sometimes that takes the form of a synopsis, sometimes an actual outline. From that point on, I write in scenes or conversations, then go back and work to see how it all ties in together. All the while I'm building the characters, letting them evolve, learning what kind of behavior to expect from each one.
A&RBC: What is your favorite genre of books?
Valley: Fantasy, especially if it involves complete other worlds. It's the ultimate imaginary trip.
A&RBC: Are you an avid or occasional reader?
Valley: I consider myself an avid reader, but much of what I read nowadays isn't always books. I enjoy learning about the world, the past, the present, the future. I'm trying desperately to keep up with what's going on in today's writing world, too. With all the online newsletters, plus the magazines I subscribe to, it's a big chunk of my so-called free time. Getting to read any kind of book is a reward, either that or I'm playing hooky from something to make the time to read!
A&RBC: What are two things you want your readers to know about you?
Valley: Hm. First, that I am passionate about my writing. My goal is to create stories that fit with people, that they can relate to and enjoy, maybe even discover something about themselves in the reading. And second, that I am at heart, and always will be, a small-town girl who still believes that one person can dream big and make a difference.
A&RBC: If you could interview one of your favorite authors, who would it be? Why?
Valley: Ray Bradbury. From the first time I started reading his work, I was blown away by the depth of his intuition on what it means to be human, and the way he can take simple words or phrases and create whole new contexts. AThe Illustrated Man@ is a perfect example.
A&RBC: What is or was your dream job?
Valley: In some ways, I'm living my dream job. I'm an author and artist, all at the same time! I like to think that these two facets of my life are interdependent. They enhance and feed each other.
A&RBC: What new projects are you working on?
Valley: Well, I'm finishing up the next book in The Rocky Road Series. That one should come out in Spring of 2012 B I don't want to give anything out on that yet, since Speeding Tickets only just launched. I'll be hot and heavy into number three shortly thereafter. In between these, I'm working on something totally different B a book based on the life of a dear friend who passed away last winter. He gifted me with a lifetime of unique anecdotes and images from his growing up on the prairie during the early 1900's, through his coming of age during WWII, and his ongoing love affair with aviation.
A&RBC: Where can readers find you?
Valley: Readers can reach me via my website, http://www.valleybrown.com/, or my blog, http://valleybrown.wordpress.com, or on Facebook by just doing a search there, or connect from the website. Speeding Tickets is available through Amazon.com, Barnes & Noble, and many other  booksellers, or through my publisher, http://brokenglasspublishing.com .
Authors & Readers Book Corner appreciates your time!
Posted by Teresa B at 7:59 AM