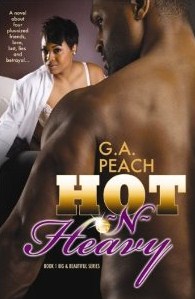 In Hot-N-Heavy the first installment in the Big and Beautiful Series by G. A. Peach, readers are introduced to four friends, Tabitha, Renee, Kym, and Janelle. These plus size divas are taking by storm. These four friends deal with love, lies, and lust with a grain of salt and a game plan.
Tabitha Monroe is the owner of Big Girl Couture, a boutique she very proud of. Tabitha seems to have it all especially after she meets the man of her dreams. Tabitha just has to decide on what lengths she is willing to go to have him.
Janelle Martin is a married woman trying to keep her marriage together. Janelle has noticed her husband’s wondering eyes and realizes that he has to be hiding something. They say do not ask the questions you do not want answers to. When Janelle finds out why her husband has lost interest in her and their marriage, she will have a hard decision to make.
Kym Webb is a 20 year old who is full love life an excitement. Kym is also living a secret life and when her secret is revealed, Kym learns the hard way that every action has a reaction. She will have to face the consequences while acknowledging karma.
Renee Washburn has issues about her image and being a plus size woman. Renee’s lacks the ability to deal with these issues which has lead her from one bad relationship to the next. Renee soon recognizes that before she can deal with someone else she must first deal with herself. Once she starts recognizing her worth and loving herself, another obstacle comes knocking at her door.
Hot-N-Heavy is about four friends working with the hand they have been dealt. It is about women dealing life issues in the best way they know how. This was an entertaining and drama-filled book that kept my attention till the end. The author lets readers know that plus-size women can be divas too. I look forward to reading future installments in this series.  I recommend Hot-N-Heavy to others.
Reviewed by Teresa Beasley