﻿ ﻿
The Lip Gloss Chronicles 4: Secrets Untold
4 Stars
In the Lip Gloss Chronicles 4: Secrets Untold by Shelia Goss, readers meet Porsha Swint a straight “A” student with a host of friends and a loving family. When Porsha over hears a conversation between her parents, she finds out that her biological father is none other than Dion McNeil, sports newscaster who also happens to be an former Dallas Cowboy. Porsha is shocked, hurt, and angry that her parents have kept this important information from her for 15 years. Porsha’s grades start to drop, her mood changes, and she now has an extended family. Will her parents rectify the wrong that has been done?
When Jasmine McNeil finds out that she has a step-sister the news does not sit well. When she finds out that her new relative is one of her classmates that she does not care for makes it even worse. How could her father do this to their family? Jasmine’s reaction to the news causes friction between her and her newly found sister. Will Jasmine get over her father’s betrayal?
Secrets Untold is about blending families. The author provides readers with characters that have realistic emotions that any reader can relate to.  This story deals with a family secret and how both families dealt with the secret once it was revealed. Shelia Goss has a unique writing style that is sure to keep readers wanting more. I recommend Secrets Untold to others.
This book was provided by the author for review purposes.
Teresa Beasley
A& Reviews 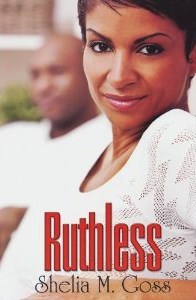 Ruthless
4 Stars
In Ruthless by Shelia Goss, readers will discover the true meaning of wanting something you cannot have. and Uriah is a loving couple. is a successful nurse and Uriah is a loyal businessperson. When Uriah is called to work overseas, it takes a toll on his wife. What is a wife to do with a lot of time on her hands?

David King is a man that loves to get what he wants. David is a strategist and will do whatever it takes to accomplish his goal. Once David has his eyes set on winning the untouchable prize, he puts a plan into action. David soon realizes that he needs help for his plan to succeed and he recruits one of the best. Will everything go as planned?

Ruthless is about marriage, sacrifices, and desires. The author has done it again by providing readers with an entertaining and suspenseful book. The main characters kept me on a rollercoaster while anticipating their next move. Shelia Goss has never let me down with her writing style and I will continue to follow the Women of the Bible series. This is a must read book and I definitely recommend it to others.

This uncorrected proof was provided by the author for review purposes.