Author of The Week: Nigli Brown 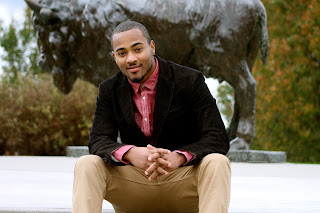 Q & A with Nigli Brown


A&RBC: What are you hoping readers take from your book?
Nigli: I’m hoping readers take from my book that we don’t have to fall because of the obstacles that tries to stop us up. How our strength will be the only way to accomplish success, to never give up, to read this book and either say “This is The Life of Me” or “This is The Life of Someone I Know”.


A&RBC: Most writers have a process or method for writing their books, what is yours?
Nigli: My process for writing my books is simple I think about things every hour to write about I imagine the perfect stories from the scenes around me. After that I just type the story up.


A&RBC: What is your favorite genre of books?
Nigli: Fiction


A&RBC: What are two things you want your readers to know about you?
Nigli: I’m a father of a baby girl, and a junior in Applied Mathematics at The University at Buffalo


A&RBC: If you could interview one of your favorite authors, who would it be? Why?
Nigli: I would interview Zane because I admire her for her success in self publishing and would take some tips from her.


A&RBC: What is or was your dream job?
Nigli: My dream job is really just to help others, which ever way  that comes.


A&RBC: Where can readers find you?
Nnigli: Readers can find me at the following web addresses

The life of me is and inspirational thriller that covers the story of a teen who grew up fighting for his survival through foster homes and crack houses. But everything changes after Anthony loses the closest thing to him... Lisa. Now 16 Anthony meets Ashley, but her father is a mystery, who is he? What secrets will Anthony uncover, and will he make it through this last hell in his life alive.
Posted by Teresa B at 5:14 AM