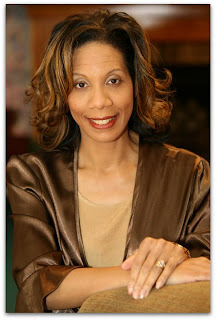 About the Author
Pat Simmons is a self-proclaimed genealogy sleuth. She is passionate about digging up the dirt on her ancestors, then casting them in starring roles in her novels. She has been a genealogy enthusiast since her great-grandmother died at the young age of ninety-seven years old. Pat has won numerous awards for her novels which include: Talk to Me, Grace and Humility and Still Guilty, which was voted the Best Inspirational Romance for 2010.
Pat is best known for her Guilty series: Guilty of Love, Not Guilty of Love, and Still Guilty. She is continuing the series through the Jamieson Family Legacy trilogy: Guilty by Association, The Guilt Trip, and Free From Guilt. Pat has recently been nominated for the best Christian fiction award by the African American Literary Awards for her latest release, Crowning Glory.
Pat and her husband live in Missouri and have two children. Find out more about the series at TheJamiesonLegacy.com or visit the author online at www.patsimmons.net

Aaron Jamieson is living a carefree life. He's good-looking, respectable when he's in the mood, but his weakness is women. When a woman tries to ambush him with a pregnancy, he takes off in the other direction. Responsibility as an option is something he learned from his absentee father.

Talise Rogers has a bright future ahead of her. She's pretty and has no problem catching a man's eye, which is exactly what she does with Ace. Their chemistry is undeniable and their passion explosive. Trapping Ace is the furthest thing from Talise's mind, when she learns she is pregnant.  She is determined to be a good parent.

When Ace rejects her she lets him know, " I want nothing from you Ace, not even your name," and she means it.  But Ace's big brother and cousins don't plan to let the child who represents the twelfth generation descendant of a royal African tribe leave the fold. Whether Ace decides to accept his responsibility or not, his family embraces Talise and baby.  As for Ace, they turn him over to the LORD.  How long will he be able to endure the guilt trip he's experiencing because of his choices?  What will it take for him to accept responsibility and turn from following in his father's footsteps?

The Jamieson Family Legacy series follows the lives of the two Jamieson brothers in Boston, Kidd and Ace and their cousin Cameron from St. Louis.  Kidd, the older brother, is struggling with anger and resentment issues toward his absentee father who never married his mother, but had the audacity to demand his illegitimate sons carry his last name Jamieson. Ace, on the other hand, is on a collision course with disaster as he shows how much a "chip off the old block" he is when it comes to women. Their highly educated MIT graduate cousin, Cameron Jamieson, is all about saving his family from self-destruction. Through genealogy research, Cameron's mission is to show his cousins their worth as eleventh generation descendants of a royal African tribe and give them a choice: to be angry black men or accept the challenge to become strong successful black men.

The Jamieson men in this three book series are challenged with accepting that the past and the present are both in God's hand.  Without Him they can't move forward toward their future blessings. The bonus storyline is one that progresses the story of the much-loved Grandma B.B. character from the author's previous Guilt books and her new sidekick, Mrs. Valentine.

Book Review
If you have read the book, please post your book review here or link to it if you have posted the review in another spot. We do encourage posting book reviews on Amazon.com and other online bookstores.

For More Information
Visit the author online at:

Here is the link to Pat Simmons Book Trailer - http://youtu.be/Lz9rhR9qj0o

Please enter Pat’s Book giveaway contest!
To enter, leave your name and address in the comment section AND answer the following question

List the titles of Pat Simmons books you have read.