About The Book
Bullying was once considered a harmless rite of passage. Some were either bullied in school or they were the bully. What was once considered an acceptable practice has now been drawn into the limelight by the national attention of highly publicized suicides due to bullying.
Bullying can take on different forms. Bullying is not just a physical act but can also be an emotional, written, or verbal act as well. Bullying can take place in the workplace, school, online, and even while we are traveling in our vehicles on the road. Bullying is a form of abuse that has reached epidemic proportions in the United States and civilized nations across the globe.
When bullying goes too far, the end result is sometimes suicide. Suicide should never become an option. One life lost to this senseless way, is one too many!
Seven authors (Jo Davis, HD Hatcher, Omegia Keeys, Autumn Prince, Lisa Rusczyk, KJ Thompson, and Vogue) have joined forces to send one message. That message is, “You are not Unloved!” Unloved is an anthology dedicated to those who have been the victim of bullying, or know someone who has been bullied.
*All proceeds from Unloved will go to charities in support of Bully Prevention and/or Suicide Prevention. 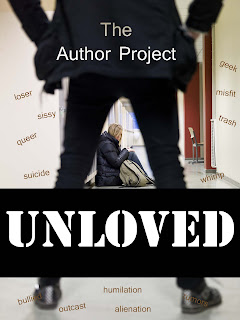 Review﻿
Have you ever reminisced about things you did when you were a kid? After reading Unloved by the Author Project, I had no choice but to do just that. I learned as parents that we need to pay more attention to our children, their friends, and their daily activities. Unloved is a collaboration of seven short stories that focus on bullying, whether it is in a child's home, amongst a child's friends, or at school.In this collection of emotional stories, three really touched me.
About A Bully by Autumn Prince is the story of Brandon and Eric, two best friends that share everything. When the two friends spend a summer apart, the true meaning behind their friendship is revealed.

Meech by Jo Davis is a story about a student in denial. One student's act of reaching out to a friend becomes more than either one of them could imagine.

The Beginning of the End by KJ Thompson is about Tracey Reed, who happens to be in the wrong place at the wrong time. Tracey's curiosity lands her in an unpleasant situation where she will have to reach out to a friend for help.

Unloved is a compelling collaboration of stories representing how the unfair treatment of others can lead to tragic endings. A bully can be of any age and the act of bullying can be committed in different ways. Readers will definitely relate to the characters throughout this book and what they have gone through. Unloved was a revelation for me and I definitely recommend it to not only young adults but parents as well.